Height: Up to 5 feet

Number of eggs laid: Up to 50 per season 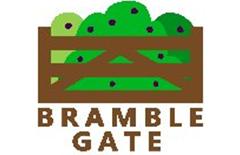 Keep an eye on this page as there is more information on its way, such as how to care for chicks. There are also lots of beautiful photographs coming soon!

Our boys and girls just couldn't resist going out after a heavy rainfall. They didn't enjoy getting cleaned up afterwards though!

Like our emus, the rhea are fed on ostrich pellet. This is fed in a bucket and kept under shelter to make sure it doesn't get wet. When putting food out it must be visible to the rhea otherwise they wont find it, and wont feed. It is important that the rhea also get fed fresh fruit and vegetables. Ours particularly love apples, pears and cabbages. Its best to try them on a variety to work out which ones are their favourites, and which they will choose to leave. It is best to scatter the food in the pen to give them all a fair chance at eating them. If its put in their food bucket, the more dominant birds might eat it all first. Rhea can consume a lot of water, particularly in hot weather, so keep an eye on water levels, and change at least once daily. Water buckets should be kept outside to avoid dust or bedding contamination.

As you can see the fencing is a couple of feet higher than the rhea.

This is Roddy, one of our male rhea. He is getting used to modelling for us now. 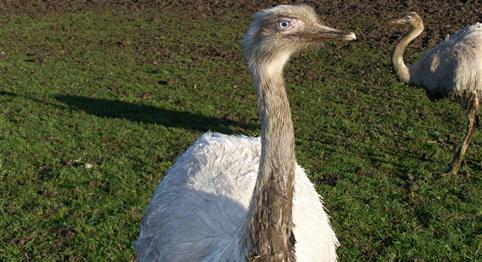 Most rhea are ready to breed in their second year, but some aren't ready until their third. The older they are, the better breeders they become. The breeding season starts in the spring, when the males begin to attract the females by showing off their large wings. You will also here the male produce a mating call; a two tone, deep then high call. One the male has chosen his mate he will circle her. After around two weeks the eggs will start being produced. Like with emus, the male will take care of nesting, allowing the female to move onto another mate. The male will build a nest by digging out a hollow and filling it with straw, leaves and feathers. The female will lay every other day filling the nest for the male to incubate. The male would then usually sit on the nest without leaving until the eggs hatch. As with our emus, we are planning to gather the eggs and incubate them in our Brinsea incubator until they hatch. The eggs take around 35-40 days to hatch. Usually the male would then raise and protect the young for the first two or three months, until they can start fending for themselves. 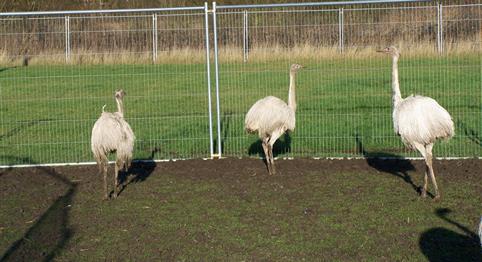 The rhea originates from South America, and is a member of the ratite family along with the ostrich and the emu. The word rhea originates from the Latin word for 'ratis', meaning raft. The rheas breast bone is shaped like a raft except it has no heal. The rhea has large spanning wings however it cannot fly as they have no large bone to which the wing muscle can attach. When the rhea runs it uses its wings to balance when suddenly changing direction.

The rhea has long powerful legs that enable it to easily escape its predators. They have three toes, each ending in a large, sharp claw. As the rhea is not a perching bird, all of its claws face forward. The rheas feathers are loose and un-barbed, and in our case white, with a slightly greyer head.

The rhea is not as docile as the emu so can be more of a challenge. They don't transport as easily and are particularly sensitive to erratic movement or sudden noises. 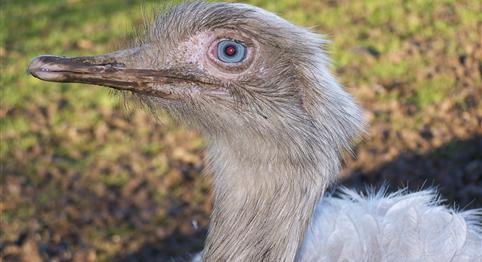 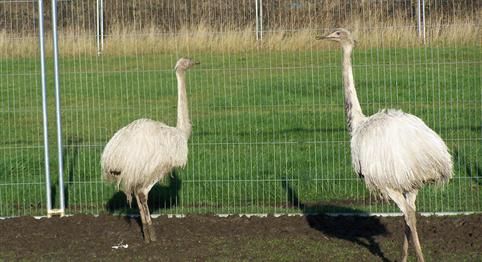 A group of adult rhea require enough room for them to run, exercise freely and have their own space if needed. . The amount of space will depend on how many rhea are in the group. For fencing we use the same as for the emus (see information on emus). It is important that the fencing does not have holes big enough for the rhea to put their head and feet through as this may injure them. The recommended height for fencing is five feet, but we prefer six to be safe. The same rules apply for rhea as they do the emus;  don't put anything next to the fence that the rhea can use to jump over.

It is important that you provide adequate shelter for your rhea, even if they barely use it, it will be essential in extremely hot or cold weather. It is just as important for rhea to escape from the hot sun as it is to escape from harsh rain. A shelter also ensures that the food stays dry! If no natural cover exists, such as overhanging trees, then you may need to build one. The design we use is similar to a capital G from above. Allowing free entry and exit with the open front, but allowing total cover from the wind, rain, and sun. We also have a sloping roof from front to back, with a good height so the rhea don't feel too enclosed. The height we would recommend is about six or seven foot.