Below: The emus will do anything for a fresh cabbage! 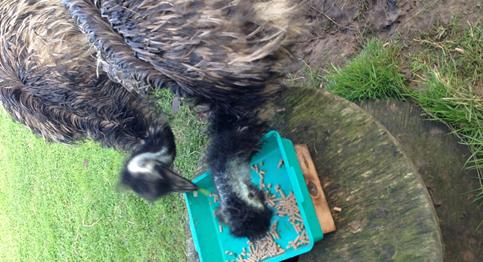 Albert is a typical male Emu. He is extremely nosey and is more affectionate than Alice. He also loves his photo being taken! 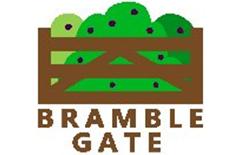 You can also see how inquisitive young emus can be, especially when there is something shiny to look at! 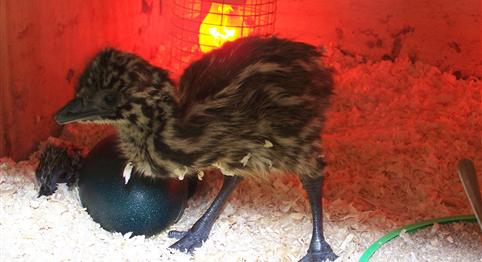 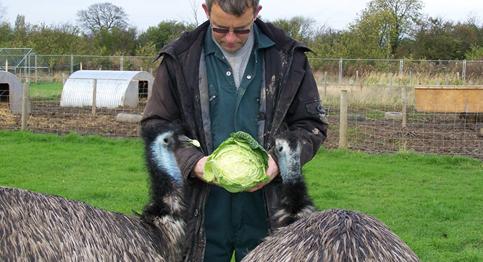 Class: Aves
Order: Struthioniformes
Family: Dromaiidae
Genus: Dromaius
Species: D. novaehollandiae
Native to: Australia
Height: 4.9 to 6.2 feet (1.5 to 1.9 meters)
Weight: 66 to 150 pounds (30 to 68 kilograms)
Life span: 10 to 20 years in the wild, up to 35 years in zoos
Incubation: about 8 weeks
Number of eggs laid: 5 to 15 eggs per clutch, up to three clutches per season
Age of maturity: 2 to 3 years
Conservation status: lower risk 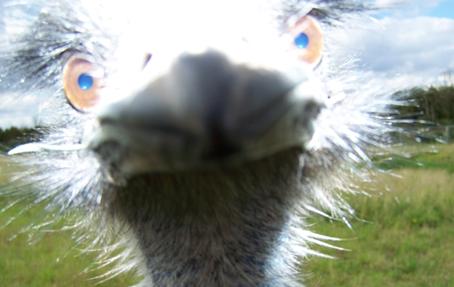 Emus become sexually mature around two years old. They usually pair up in their second autumn, ready to breed during the winter. In the wild the pair will remain together for around 5 months and their courtship includes nest building. Our emus have grown as a pair and are extremely close all year around. Our pair breed from the end of December through to March, laying every three days, producing around 30-40 eggs per year. During the mating season the male grunts a lot while the female drums, while both reduce their food intake. The females will dominate the male during pair formation, however the male is left with the job of incubating the eggs. The female may then find another mate to breed with. During the incubation period the male becomes aggressive and protective over the eggs. The male is known to incubate without feeding, drinking, or leaving the nest. We don't let our male do the incubating as this would stop the mating process and reduce the amount of eggs produced. Instead, we collect the eggs and incubate them in an incubator. We use a Brinsea Fully Automatic incubator. Collecting the eggs can often be a difficult task as Alice enjoys laying in various places! Hatching will begin after around 54 days.

Emu eggs are around 13 cm x 9cm. They are dark bluish-green when fresh, lightening when exposed to the sun. The shells are thick with paler green and white layers within. They weigh around 500-600g, and are the equivalent to about 10 chicken eggs. Any infertile eggs are welcomed by craftspeople who carve and decorate them. 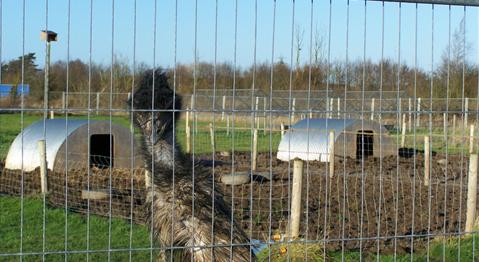 This chick is standing confidently at three days old. 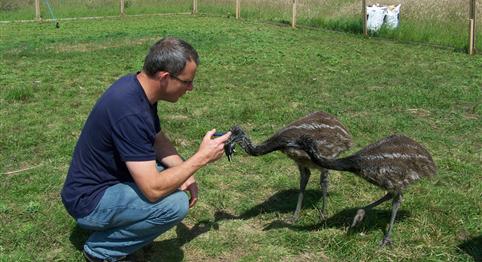 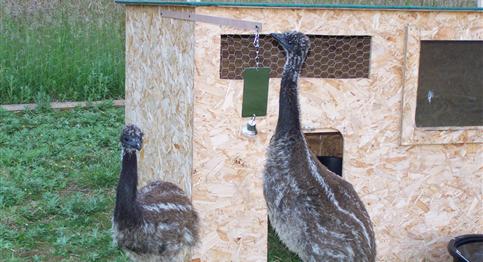 Here you can see the chicks losing their stripes for a thicker, browner plumage. You can also see how tame they can be.

Here is an example of housing for young emu, with pull down doors, and shiny toys!

Chicks love getting some sun and having a run around.

Alice peering through the fence. Example of the heras fencing we use.

You can see the chicks are quite alert as soon as they hatch. 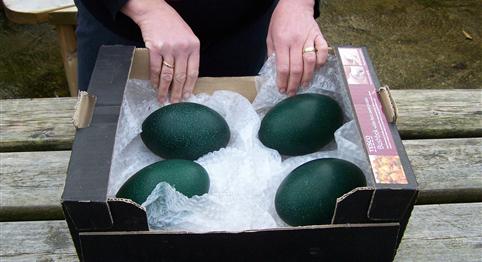 This chick loves getting it's photo taken, just days after hatching. 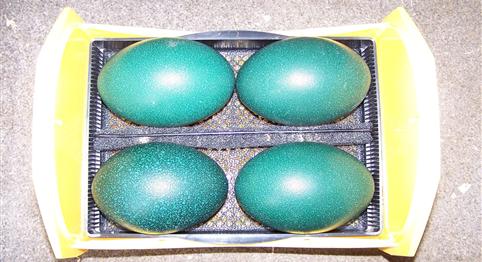 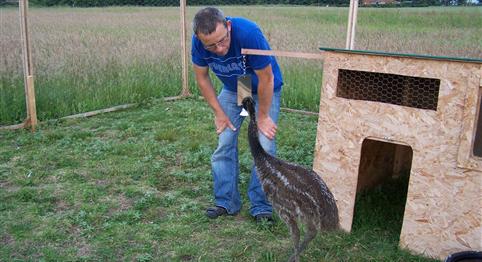 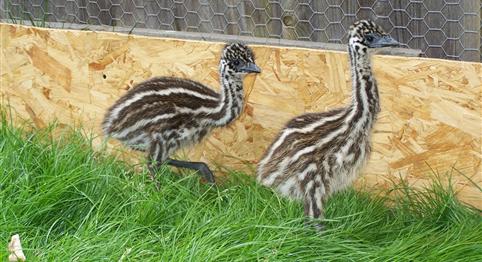 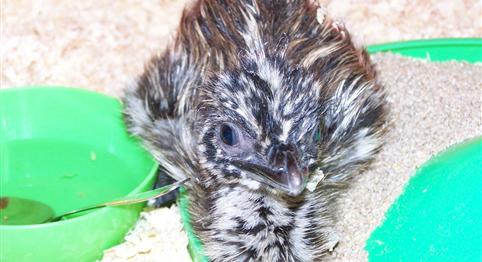 And these are some of the eggs produced by Alice, ready to go into the incubator.

We hatched Alice and Albert out of these very eggs.

Emus are omnivores, like chickens. They can feed on grass, weeds and leaves, and sometimes insects. Our adult emus are fed on ostrich pellets. They are fed breeding pellets during breeding season and growers pellets during off season. 1 - 1.5 lbs. per emu, per day ensures each emu gets the nutrition it needs. Emus also love rolled peas and rolled wheat, and they particularly love vegetables such as carrots, cabbages, lettuce and other greens. Our emus are always most affectionate when presented with a fresh cabbage! Albert also has a particular liking for pig pellets but he only gets these when he is being sneaky!

Chicks can be fed on chick crumb until around 6 weeks old, when they are ready to be introduced to ostrich pellets. Slowly introduce the pellets along with the lower protein crumb to ensure the chicks don't grow too rapidly. Emu chicks need a few 'lessons' when learning to feed. By adding shredded cabbage, lettuce and carrots to feed the bright colours will attract the young and encourage pecking. A silver spoon should be added to the water which also attracts the emu and encourages pecking. An emu just cannot resist anything shiny!

The pellets you use will depend on what you can source locally. If you do not have a food producer close by that supplies ratite feed then poultry layer pellets are a suitable alternative. For both adults and young, a good, clean supply of water should always be available.

An adult breeding pair of emus requires at least 1/10th acre of space. It is better to keep emus in pairs, not trios, however the more space you have, the more birds you can keep. They need enough space to get out of each others way, while also having 'hiding' places such as bushes. At Bramble Gate we provide our emus with an enclosure that is an acre in size. Within this acre we keep our other animals in smaller pens, allowing the emus to stroll (and play) around them.

Emus don't need to be shut in at night, except when they are young. When young they are vulnerable to foxes, however the older emus can easily see foxes off! Adult emus need a shelter that has at least three sides, in order for them to shelter in very bad weather or hot sunshine. Young emus enjoy huddling together inside to keep warm, while adults enjoy sleeping in small groups outside, against the shelter, or under bushes.

The fencing needs to be strong and very secure. Escapology is not the emus greatest strength, however when spooked an emu may run into the fence, and it can also jump very high. Our fencing is 6' high. For fencing we use heras fencing, also known as building site fencing, in order to provide security for the birds. You can use weldmesh fencing, but avoid chain link fencing as the emu may be able to climb it. When building your caging always ensure there are no sharp edges and certainly never use barbed wire. Also ensure there are no gaps underneath as the emu will push through it! If there are objects, like water buckets, close to the fence the emu may use these as aids to jump.

Emu chicks are about 7 inches tall when they hatch, and have dark brown and cream striped bodies with speckled heads. At around 6 months these stripes fade and the downy plumage is replaced by the brown feathers you see on adult birds. In general, the chicks are strong and have very good survival rates, but problems to watch out for are weak legs at hatch.

Chicks can hatch between January and June , so depending on weather conditions, they will need to be kept on heat for variable amounts of time. Temperature should be about 28-30 degrees. You can work out if the temperature is right for the chicks by monitoring their behaviour; if chicks are too hot they move away from heat, if they are too cold they huddle together trying to get underneath each other. It is important that heat is adjusted based on these signs. It is vital that they don't get chilled, but if the temperature is too hot they wont get up to move around, and exercise is important for young emu. The temperature can be reduced by a couple of degrees daily as the emu grow in order to encourage exercise. Remember it gets cold at night so try and keep the heat at that 28-30 degree mark for about three weeks. Night time monitoring is also important to ensure temperature levels are just right. For bedding we use old towels for the first few days as this allows the chicks to keep warm, while giving them something to grip so they can learn to stand and walk without slipping. Once the emus are confident on their feet you can use newspaper or soft shavings for their bedding.

By three days old the emu chicks should be active and be able to walk around their area. They will spend quite a bit of time in their first week resting and sleeping, but you will see them become increasingly active, becoming quite confident at around a week old. At a week old they need a minimum of two feet x four feet, preferably more if you have room. This will give them space to run, and they can run very fast! Not only do chicks love running, they also love jumping and rolling, so you can see why extra room is a bonus for them. Chicks are very energetic, so if yours seem quite lifeless and sleepy, you may need to check feed and water supplies, or reduce the heat, also checking for injuries. As they grow, they like to run more, so a longer pen is ideal.

If the weather is suitable, and not too wet, cold or windy, chicks should be let out to enjoy some sunshine at around three to four weeks old. They will need a good sized pen to exercise in, with adequate shade and water supplies. Although chicks enjoy a short shower, it is not recommended to let them get too wet as they will get a chill as they haven't developed waterproof feathers at this stage.

Never creep up on chicks as they are very nervous and may become distressed by sudden movements or loud noises. Once distressed they could cause harm to themselves or other chicks by stomping or running around erratically. Talk to them as you approach so they know you are there. It is also important to talk to chicks to allow them to get used to your voice.

Emus can be moved outside by four weeks, but will still need to be on heat at night for another four weeks. By around eight weeks they may be ready to go back to their parents outside, providing shelter is provided. Emus can become independent at around 6 months old, but can remain with their family until the next breeding season. The chicks are almost fully grown after a year.